So you see oil on the Oil Pan - the piece of metal at the bottom of the engine - or find it on the driveway just under the Oil Pan.
Before the oil pan leak can be fixed, we need to determine the cause of the leak. There can be several reasons for an Oil Pan leak.

Where the Oil Pan bolts to the bottom of the Engine there is an Oil Pan Gasket. Over time this Oil Pan Gasket can go bad which means that it no longer stops oil from escaping the engine. When it goes bad Oil will leak down the sides of the Oil Pan. When the leak is really bad, oil will appear under the vehicle.  Check for loose bolts first before assuming the Oil Pan Gasket is bad. See "Oil Pan Loose" below.

When a car drives over objects in the road, sometimes they can hit the Oil Pan. If the driver is unlucky, they can put a hole in the Oil Pan. This is a big problem if you drive off road. For off road driving a Skid Plate (Sump Guard) should be put over the Oil Pan. This is a heavy piece of metal that takes the impact of any hit. When an Oil Pan has a hole in it, oil will come out very quickly which is bad for the engine. The oil will also form a large puddle under the engine when the vehicle is parked.

Drain Plug allows Oil to be drained out of the Oil Pan.

1- Drain Plug which is like a bolt may not be put back properly. If the Drain Plug is not tight enough, Oil can get by it. When this happens it is like a hole in the Oil Pan.

2 - Sometimes when the drain plug bolt is put back, it is screwed back incorrectly into the Oil Pan damaging the bolt threads. When this happens, it can prevent the Drain Plug Bolt from forming the correct seal against the Oil Pan.

3 - Where there is a Rubber Seal on the Drain Plug. This Rubber Seal can wear out and the Seal lets Oil escape. 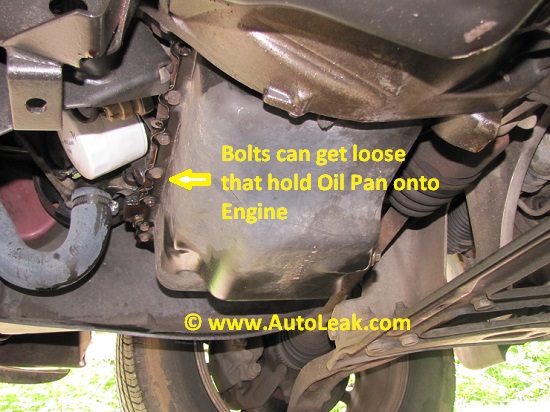 The Bolts that attach the Oil Pan to the bottom of the engine can get loose over time and even some can fall out (the missing bolts will need to be replaced). When the bolts get loose, they do not apply enough pressure to the Oil Pan Gasket. When this happens, Oil gets past the Oil Pan Gasket. The Oil then drips down the side of the Oil Pan.

Before attempting to change the Oil Pan Gasket, try tightening the bolts evenly until they are tight. "Evenly" means that each bolt is tightened a little bit at a time (each bolt should feel as tight as the next bolt but not fully tightened until the last round of tightening) then the next bolt until all bolts on the oil pan have been tightened a little bit. This process is repeated until all oil pan bolts are as tight as possible. Purpose of "evenly tightening" one bolt at a time is to avoid causing the oil pan to warp (bend) which would lead to a oil pan leak. Bolt tightening in this way allows the metal of the oil pan to spread out evenly as the oil pan bolts are tightened.

For bolts that were found to be loose, you can remove the bolt and apply thread lock (Glue liquid sold in a tube at auto part stores - make sure to get the thread lock that allows someone later on to remove the bolt) then put the bolt back. Do not remove all loose bolts at one time. Only remove and replace one bolt at a time. The thread lock should stop the bolt from getting loose in the future.

When replacing missing bolts, be sure to get ones of the right length, thread type and strength. Not all bolts used in an Oil Pan will be of equal length. Sometimes when you buy a used car, the oil pan leak may have been caused by someone putting the wrong length of bolt back onto the Oil Pan. Wrong length of bolt may prevent the bolt from securing the Oil Pan tightly enough against the engine to stop the Oil Leak.

Question or Solution not mentioned?
Use Auto Repair Forum to ask or answer questions about car and auto repair.